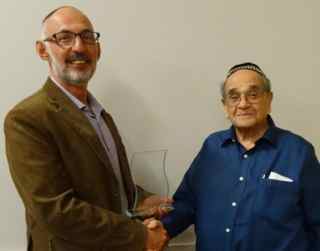 UPJ President Stephen Freeman (left) presented the Vatik Award to John Schinasi at Temple Shalom, Gold Coast on 8 May. The following is an excerpt from Stephen’s speech.

There are a number of dynamic forces currently at play in the Jewish world:

The largest segment of Jews is not Chabad, nor Progressive Jews - even though we represent the majority of affiliated Jews.

The largest segment are, in fact, unaffiliated Jews: those Jews who identify in census and to themselves as Jews, who attend film or book festivals, or even Limmud Oz, but who are not even “two day a year” Jews, who do not join synagogues or participate in Jewish religious life.

These Jews are identified by Rabbi Baroness Julia Neuberger, the head of the Liberal movement in the UK, as “semi-demi Jews, who just want to have fun”. There, a highly successful community centre, JW3, has been constructed, offering a multitude of courses and programs to try to encourage these Jews to participate in Jewish life.

Here we are not in a position to build stand-alone community centres, but we should look at other ways to connect with this growing group within our highly assimilated community, through programs and projects, such as meaningful tikkun olum, or alternative inclusive religious services. Progressive Judaism, with its inclusive egalitarian philosophy, should be able to build bridges to connect with these Jews, both here in the Diaspora and in Israel, where many secular Jews are now seeking some spiritual dimension to their lives.

Watering down of divisions between various religious affiliations

Recently I attended a joint Shabbat function between North Shore Temple Emanuel and North Shore Synagogue, a traditional Orthodox community of similar size, but with an ageing demographic. Such an activity would have been inconceivable only a few years ago. While there are still clear divisions within the Jewish community, I have observed a move for the various forms of modern Judaism to share more of those things that join us rather than divide us.

The recent murders in the Paris supermarket demonstrated we must accept that hatred of Jews continues, in new forms and guises, but with renewed virulency.

We have no choice but to accept this reality, but must take steps to ensure we can continue our “Jewish” identity without fear.

I suggest we should do the following: